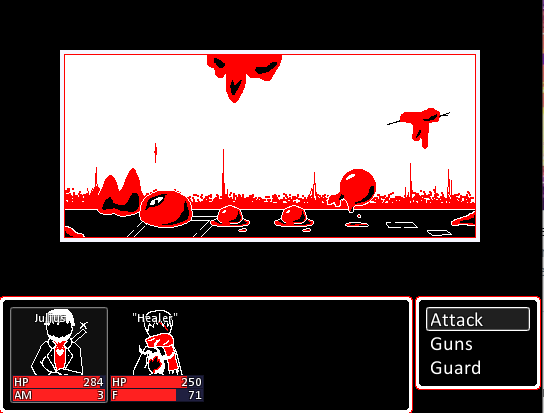 It's been half a year since I uploaded the demo and I'm almost at the 2/3rd of Slimes! I'm kinda disappointed in myself because I fully expected to have gotten more done within half a year, but you know, better to take your time than destroy yourself, I guess (but fuck I barely did anything in August.......). That said, I do aim to have this out before the end of the year! IGMC? Nah, screw that, gotta channel that game jam energy into this. That YIIK let's play energy is going into something that will (hopefully) be good.

The game now currently goes up to Floor 14 and I plan to end the game around 20. The second main boss hasn't been implemented yet, but that and the cutscenes leading up to it are the only real roadblock I have for this point in the game.

A criticism I've had with the game is that there isn't something stopping players from keeping one weak enemy alive so that you can fully boost Healer's focus. To deal with that, after a set amount of turns (that varies depending on enemy troop), the slimes will be inflicted with Rage, a status effect that boosts their strength and defense that can't be dispelled. It's inspired by the stuff from Zeboyd RPGs and while it's not perfect, it'll hopefully motivate people to actually finish battles.