A downloadable game for Windows

Of the things that came with the arrival of an alien being, the weakest of all of them are the slimes. Nobody knows what exactly these things are, but, as weak as they are, nobody's succeeded in destroying one of the dungeons from which they spawn.

Julius Anderson, a modern day crusader, takes the job of eradicating one of these slime dens. Hired on to help him is, well, Julius refuses to learn his name, on account of him being "diseased" with magic, but he's a healer. Through teeth-clenched teamwork, can the duo reach the bottom floor and destroy the source of the slimes?

This game is available on Steam, but the itch.io version will always exist for people who are unable to pay. That said, I'd still appreciate it if you supported me.  Paying $7 will entitle you to a bonus PDF, as well as a Steam key that I will e-mail to you!

If you like this game, check out my latest game, I Hate You, Please Suffer!

Q: What are the differences between the demo and the finished game?

A: I documented some of the changes here. I'm mainly keeping the demo download of the game around as a comparison point to the final game.

Q: Is this game free?

A: Kinda! The game is free but you can get a commentary PDF if you pay me money.

Q: Haha, I thought you were some socialist/communist, yet you want people to pay you?

A: Don't make me reference the Matt Bors comic.

Q: How does this relate to other works?

A: It takes place in the Fishing Minigame universe, far before the events of those games.

Q: Why only three to four hours? RPGs should be dozens of hours long!

Q: Will this be on Steam?

A: Yes! In fact, if you pay enough for this game here for the commentary PDF, you are also entitled to a Steam key when the Steam version goes up!

I really appreciate how this game doubles down on you playing the bad guy, without giving you a way to weasel out of anything, forcing you to roleplay Julius as he goes on a slime-murdering rampage, especially if you want all the story tidbits. (I'm surprised you didn't go into more detail about that aspect in the PDF!) Given that, the ending definitely took me by surprise, and the post-credits scene was delightful.

It's a shame that I had to play through on the "easy mode" to save time, since I spent 3 hours unknowningly playing through the entire demo because it was the only option in the itch app and I didn't look close enough. I would have liked to experience the combat challenge from the late-game encounters and bosses, although the final gauntlet let me fake it a bit at least. That said, pleeeeeeease mark the full game downloads as being for Windows as well, so that more people using the itch client don't make the same mistake!!

Also the art style and music are exactly what I wanted out of a weird RPG Maker game, and it really sells the story too. I'm really happy to have played it.

I’m glad that you enjoyed the game, and I’ll be sure to fix that problem!

On the whole Julius thing, it’s mainly because of my Drakengard/Nier inspirations, where you play as somebody that’s a murderous asshole, for one reason or another. In those games, weapons had these side stories attached that advanced the more you upgraded them; in a sense, advancing your capacity for violence enlightened you more, and that reflects in how you get more stories in Slimes.

That makes sense! Seems like the Nier games explore lots of interesting ideas, but the core gameplay isn't my cup of tea, so I haven't played them.

The steam store page mentions hidden bosses where might these be?

On the first floor of the third stratum, there’s a church to go into with books that give cryptic hints to face them.

Ok, so I found two of the bosses the Devourer and the 3 slimes with some sort of portal. But, I can't for the life of me find the last two. The first bookshelf says to try to rest at a certain rest point followed a set of numbers, do these numbers mean to use the floor awards or to go to that floor (I am not even sure if I am at the right rest point). And the last bookshelf, I know it refers to Natalie, but I have no idea where she was almost killed, the 14th floor award mentions a side area near a door but I have no idea where that is. Could I please get a clearer hint or just straight up the answer on where to go?

The numbers actually correlate to the boss’ attack pattern. As for how to get in, interact with one of the pillows in said rest area multiple times (I forget which one specifically). I’m sorry, I don’t fully remember the hint I gave for this

As for the last area, it’s the small side area that’s on a separate screen in like, the first floor of the second stratum? I forget which specifically, but it’s the one where you push a Rock Slime down some stairs to access. Just worry about this one last, because nothing changes until you beat that third boss.

Found them, thank you for helping me. Also, dude, I wanted to say that you made a fantastic game. I enjoyed it very much, the story and the gameplay were both great the only issue I found with the game was that it was too easy even with limited save points and the weaker gear. Overall a very solid RPG Maker game.

This is my favorite game of the year so far. I am going to and have been recommending this to so many people

I love how tense this game feels, from the viscerality of its battles to the fragmented delivery of its morbid narrative(s). Both the visuals and prose are spare and striking; this word feels kind of corny but I think it's apt to describe Slimes as "raw," both in its depictions of psychological and interpersonal drama as well as of its unapologetic rage against institutions/power/fascism. Definitely one of the most memorable games I've played.

Slimes is a striking, intense, and deliciously-balanced turn-based RPG with a thrilling and immediately-relevant story. It feels like how I imagine a good, minimalist Shin Megami Tensei game would feel, or a Breath of Fire: Dragon Quarter riff that goes even harder on the survival horror influence (this is very high praise coming from me).  A scathing psychodrama through and through.

Play it and remember that, sometimes, murder is okay. Read every note and defeat every enemy, if that's how you feel.

Just finished the game, and really enjoyed it! One small thing: I had to download the game through a browser since only the demo showed up in the available downloads in the itch app, I suspect you need to mark the full game with its supported platform(s) for it to show up.

Hi there, started playing the game and got quite engaged when I found a softlocking bug. On Floor 3, you are supposed to push the rock slimes and activate some pushplates. I fought one in a corner and couldn’t take it out of there. I’d love to continue but I’m stuck and didn’t save beforehand :( . Any quick fixes on my end?

Just leave the room and come back, their positions aren’t fixed until they’re on the plates.

Thanks, that solved that issue nicely.

Anyways. After finishing it, I’m impressed by the scale of it, especially considering it’s a ‘one man show’. Overall it felt like this very intriguing mashup of Space Funeral, LISA, Undertale/Mother 3, and Neon Genesis Evangalion sprinkled on top, and it’s clear you were excited to bring this world to life. Considering the finer details though, the tone felt a bit too edgy/self-serious, and characters seem pretty two-dimensional and static. But looking at the bigger picture, I mainly kept playing because I was genuinely interested what would happen next in this strange world.

The battle system is deeper than I’d expected from an RPGM game (in addition to battling with that engine’s awkward menus, too…), to the point where it’s more akin to a juggling act than a regular JRPG battle system. It’s quite clever, and the ever-increasing rage mechanic really pushes you to resolve things quickly, despite an ever increasing list of buffs and debuffs.

There is one big issue I had with the game and it almost made me quit. After a good 90 minutes or so of good pacing and engaging lore, you reach a (to keep spoilers minimal) much larger area after a thing happens in the story. The pacing takes a nosedive of non-stop, forced, repetitive battles. This is after I developed an optimal strategy and I was just going through the motions to get to the next part of the plot. The optional lore chapters around that time also suffer from overly verbose writing and really overstay their welcome for me. That segment really becomes a chore with almost no real quiet time. Could have been shortened to create a much smoother experience I feel.

But yeah, overall, it’s a simple story but it’s engaging nonetheless, with a striking artstyle and an surprisingly intertwined battle system. Final act’s a bit too overlong, but still very entertaining. Great job.

Reply
Far Away Times1 year ago

I totally loved this. Super-pointed story that earns all its tremendous darkness, married to a gorgeous aesthetic and meticulously balanced turn-based battles. Five molotov cocktails hurled at cop cars out of five!!

(Disclaimer, I playtested this game just before release, so take that as you will)

Slimes is an excellent, excellent game. A really unique art style that works super well, really interesting and involved gameplay that really encourages strategy and guns, and a really great and satisfying story is told.

The conflict and concept of a 2 person team who hate eachother works well in the narrative and even down to a gameplay level - one skill Julius might use will debuff Healer, and vice versa.

I hope this goes down as one of those classic RPG Maker games, it's weird, some of the most impactful games for me that I always fondly remember are RPG Maker games (Ib, Yume Nikki, The Endless Empty, Nepenthe and now Slimes).

TLDR, game is great and the PDF is an interesting read too!

Just finished the demo! And I fell in love with Slimes.  First of all,  I like the battle system: pretty original, a mix of  the RPG and Survival-Horror genre; I especially like the idea of mana being replaced by ammo.

The lore behind seems very rich!  I've read every single side stories and I'm digging for the ideas behind... I've been stunned by some of them, wow.

Slimes is a maybe visually a very simplistic game by looking at the graphics, but don't be fooled by it, like we say: don't judge a book only by its cover! The gameplay is fun and the characters are very appealing (my fave character is "Healer", he's a such bean!), we're getting attached to most of them very easily.

I'm glad you liked it so far, I hope you're looking forward to the final release! 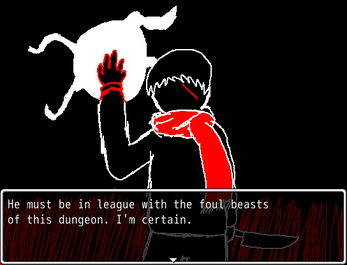 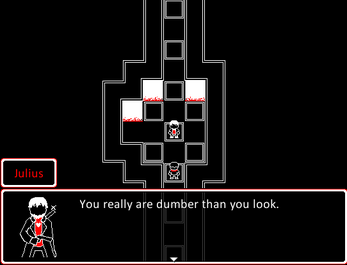 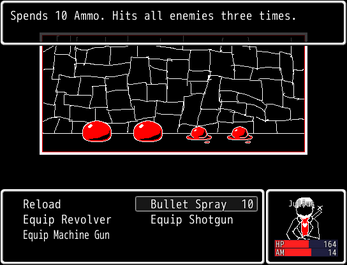 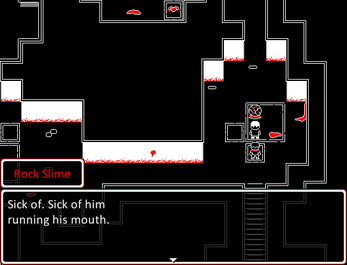 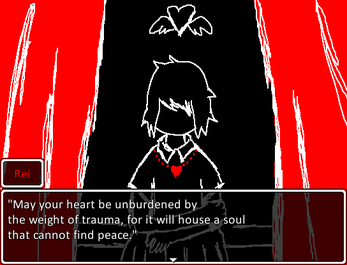