Quick Credits Edit: The font used in the game is the Larua font by Jupiter Hadley!!

Q: Why are you putting out the demo now even though you acknowledge it's not finished?

A: It's mainly my disillusionment with RPG Maker MV. The thing is, the engine's just not very well optimized. My computer has trouble running it properly it without the occasional lag spike. Every game made in MV has run badly on my computer and it's been a general issue that I've seen with people. It's a completely subjective problem, since it can run perfectly fine for some people (like that Driftwood Gaming person). And so I asked myself: "why bother to keep working on something that only a few people could properly enjoy?"

And so, I've decided to say "fuck it" and put up what I already have. If RPG Maker MV improves in the future, I would consider going back to this, however....

A second reason why I'm stopping work for now is my poor sense of scope. Initially, the game started out as an odd guy hopping into these caves while being chased by his rival and it was originally intended to be a Space Funeral-like. I ended up taking it more seriously as I went along and as I went on I began thinking of expanding on the concept of an adventuring economy/culture and putting subplots revolving around it and I ended up thinking up of adventuring NPCs that show up to travel alongside Quiddity with their own plots and -

Basically, Treasure Quest!! is starting to suffer a bad case of feature creep, and as a solo dev, it's become something unreasonable, even if RPG Maker MV worked perfectly. Honestly, if I'm going to revisit this, it's going to have to be massively scaled back. And if I do that, it may as well be in a different engine entirely.

So yeah, here's what people will be getting of Treasure Quest!!. Consider its flaws my punishment for my hubris.

Q: What did you have planned for the future?

A: I'll only say what I had planned for the second town and information based on the first, in case I ever actually do revisit this game:

A: [thinking about that Triple Triad]

Q: What was supposed to be in the rest of the display cases at the beginning?

A: More foreshadowing stuff that will no longer happen I guess 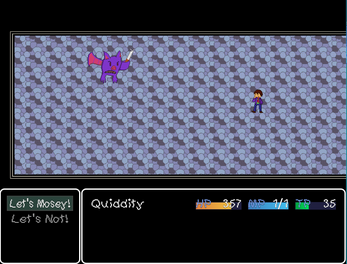 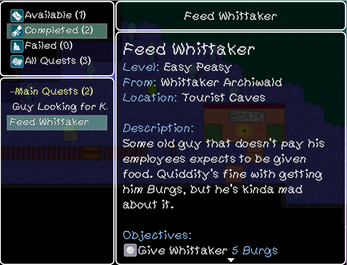